Jinn Wikia
Register
Don't have an account?
Sign In
Advertisement
in: Jinn, Kings, The Seven Jinn Kings,
and 4 more

Abu al-Walid Shamhurish (Arabic: أبو الوليد شمهروش "Shemhuresh, father of the New Born"; Hebrew: שמהורש), Chaarmarouch also at-Tayyar (the flyer), is the king of Jupiter (Musytary), the day Thursday (al-Khamees), the color Purple, the metal Tin and is monitored by the angel Tzedeqel (صرفيائيل Sarfya'il), he is said to favor green and white fabric. His successor is named Mutawakill. He had a son called Sultan al-Khal (سلطان الكحل "the black sultan"). When Shamhurish died, he also left behind a daughter, who is still alive and assists women in practicing witchcraft. He is known as Melagoos "Shamhorash" which means the usher, the one who stands on the doors of the fifth palace for Satan and one of the servants of Prince Morrah, son of Satan.

As Sidi Chamharouch, Shamhurish is venerated as a saint in some parts of Morocco by many ministers, pashas, and other traditional civil servants. There is a shrine in his honor predating Islamic settlement near the village of Aroumd, the largest village in the valleys beneath the Atlas mountains. It is a mausoleum of sorts said to contain his remains, hollowed out of the ground beneath a massive boulder, which locals have painted white and crowned with green and white flags. Upon the arrival of Islamic settlers, a Masjid was built next to it, and since then, Sidi Chamharouch has been recognized as a jinni who crossed paths with Prophet Muhammad, and subsequently converted, later becoming a Qadi (judge).

Sidi Shamharush is said to have a complicated communications network that is likened to a river with a thousand tributaries, each of which has a thousand subtributaries. There is a jinn responsible for each of these rivers, who runs errands and carries messages fro the king of the jinn to the farthest reaches of the world.

According to the Buffis, Shamharush is still alive. He has been frequently present in patients coming for cure at the shrine. The healers treat him as one of the sultans of jinn. A Buffi healer narrates the adventures of Sidi Shamharush with a female fortuneteller. The woman was possessed by al-Basha Hammou who set up the condition that she had to visit Sidi Shamharush before he would release her. The following is an excerpt from the whole story:

Once they reached the saint Mulay Brahim near Marrakech, the Buffi healer and his female patient hired donkeys and mules to undertake the journey to Shamharush. The saint appeared to be a remote stone in the wilderness surrounded by shanties. Once they arrived, the woman got afraid and asked the shrif how they would spend the night there. It was a deserted place. But when they entered a shanty, they found a still warm pasta dish waiting for them. They ate from it and went to sleep. The woman could not assimilate what was happening. Four dogs came to the place to watch over them. The following morning, they vanished. At noon, they heard someone calling outside. When they went out to see who was there, they saw no one except a large plate of couscous still hot put on the ground. They ate from it and took the road back home.

The story of the Buffi is a tour de force boasting of how Shamharush, the Sultan of jinn, has entertained him and his woman companion. He has sent his jinn guardians assuming the shape of dogs to watch over them and evoked food from nowhere to supply them with. The baraka of bringing about food from nowhere is a recurrent prototypical motif in the maraboutic culture. Saints are believed to achieve this miracle. Perhaps, this is related to their social role marked throughout the history of Morocco by giving food to charity to requesters during times of drought and famine. The maraboutic tradition states that to eat from the food prepared or brought to the saint is to take a share of his baraka. Even the saint's baraka is sometimes referred to as food, particularly a loaf of bread (khubza) to be shared by his descendants and followers. In fact, most Buffis brag of their mastership of jinn.

The title specifying that he is nasrani (‘Christian’), who is also known from some sources as Abu al-Walid or ‘Father of the Child’ (opposite). This is probably the reason why he is represented with a naked child in his hands, held upside down, although it is unclear whether Shamhurash’s inﬂuence over him is positive or negative. The talismanic symbols are complex and include also the hexagon, the ‘Seal [on the ring] of Solomon’ (khatam sulayman) which is formed by two triangles, one upright and the other upside down, symbolising the entire universe combining the upper and lower spheres.

A collection of transmissions for six ahadit (all of the sahih or hasan categories) going back to jinn transmitters. Four of them are attributed to the "Judge of the Jinn" (qadi l-jann), 'Abd ar-Rahman (or, in one case, 'Abd ar-Ra'uf) Samhuras, who was said to have met the Prophet Muhammad and to have finally died after the beginning of the twelfth century (according to the Moroccan Sadili Ahmad bin Muhammad bin Nasir ad-Dar'i). Two others are traced back to sidi Muhammad bin 'Abdallah al-Qaquwi, called the "king" or even "sultan" of the jinn ([al-]malik al-jann, sultan al-jinn). It is said that he was an inhabitant of al-Andalus and that he belonged to those jinn Companions who are still alive. He had performed the hajj during the time of the Prophet Muhammad and had fought all his battles together with him. Among Zabidi's transmitters were prominent scholars like Ahmad bin 'Abd al-Fattah al-Mallawi and Ahmad ad-Damanhuri. The transmissions from Samhuras go back to scholars of the 11th century AH (17th century CE) who claimed to have met this jinni. The person said to have met Muhammad al-Qaquwi, the "sultan of the jinn", first in a dream in the Magrib, then awake in Medina in 1192 AH (1778 CE), was a man called Abu l-Daxa'ir Muhammad bin Habib Allah bin al-Fadil bin Musa al-Ja'fari as-Samsawi who gave Zabidi an ijaza for his transmission in Cairo on 6 Rabi II, 1198 AH (28 February, 1784 CE). Zabidi wrote this collection for the Ottoman qadi l-qudat of Egypt, 'Abd al-Hamid Efendi Basim Koprulu-zade. 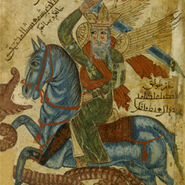