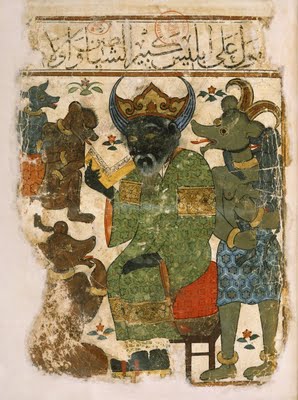 Iblīs (Arabic: إبليس‎‎, from the Arabic verbal root بَلَسَ balasa, "he despaired") or ash-Shaytaan (Arabic: الشيطان; Syriac: ܣܛܢܐ sâtânâ; Hebrew: השטן ha-sâtan, "enemy" or "adversary"; Greek: ὁ σατανᾶς or σατάν, ho satanas or satan) also known as Abu-l-marrat (Arabic: أبو مرة "father of bitterness") is the son of Tarnus, the son of Sumas, the son of Jann al-Tarnushi, the primogenitor of the jinn race. Iblis is a jinni who refused to honor Adam. The primary characteristic of the Devil, is that he has no power other than the power to cast evil suggestions into the chests of humans, and jinn, although the Qur'an does mention appointing jinn to assist those who are far from God in a general context. "We made the evil ones friends (only) to those without faith."

Al-Harith (الحارث) was a young jinni taken prisoner by the angels and raised by them; he went on to become one of their chiefs. After the creation of Adam, God commanded his angels to honor him but al-Harith refused and became ash-sheytan (the devil), and father of the sheytans. He later became Iblis.

What the Prophet said of Iblis, in the following tradition, applies to the evil Jinn over whom he presides: - His chief abode [among men] is the bath; his chief places of resort are the markets, and the junctures of roads; his food is whatever is killed without the name of God being pronounced over it; his drink, whatever is intoxicating; his muezzin, the mizmár (مزمار, a musical pipe; i.e. any musical instrument); his recitation, poetry; his written character, the marks made in geomancy; his speech, falsehood; his snares are women. Iblis lives in a huge palace on the surface of the water with a court and thousands of devil guards.

An alternative name for the main deity in the Kurdish pantheon of the Yazidi, Melek Taus (Peacock King), is Shaitan.

The origins of Sodomy[]

According to Rabghuzi in his Qisas al-Anbiya: "One year the Lord, He is exalted, sent a frost; there was no harvest. When spring came, people began arriving as usual. They said: 'This year there has been no harvest. Return home safely; next year we will give you more.' They would not depart, and the local people were not able to make them do so. The local people went to King Sadūm and told him of the situation. They had a great idol named Zīghāl. The king said: 'Go to Zīghāl, prostrate yourselves and beseech him. He may relieve you of these foreigners, or else show you a way out.' Shaytan sent a div named Khaṣkhāṣ. He came and entering the mouth of the idol Zīghāl, declared: 'If you, my servants, had listened to me during all these many years, no hardship and affliction would have befallen you. But the solution is this: When you leave here, round up those people. Throw the men from among them in your houses and rape them. They will flee of their own accord.' The people left Zīghāl and set out to pursue those persons. A man named Bāhīl went outside. Shaytan took on human appearance, that of a young man with a beautiful face. He adorned his hair and appeared even more handsome. Bāhīl saw Shaytan, took hold of his hand and led him into the city. They lay down in a house, and Bāhīl committed sodomy with Shaytan."

"An anecdote: The caliph Maʾmūn, Allah have mercy on him, said to Shaytan: 'Adam, peace be upon him, was the best of all creatures. You wouldn’t prostrate yourself before him. Yet you acted as a catamite for the people of the prophet Lut.' 'I was amazed at Shaytan and [his relationship with] the one he betrayed, and I imagined his constitution as he revealed it: He was too proud to prostrate himself before Adam, but became a pimp (قواد qawwād) for Adam’s progeny.'"

He had seven hairs on his chin and was blind in his right eye. His eye was put out by the prophet Idris (or Enoch), who was also a tailor. Shaitan once came to him with an egg in his hand and told him that God had shaped the world like an egg. Idris was enraged by this blasphemous talk and answered, ‘No, God made the world like the eye of this needle, look here.’ When Shaitan looked at the needle the prophet thrust it into his eye.

An old scribe told Westermarck that Shaitan had a penis on the inner side of his right thigh and a vulva on the inner side of his left, and that to produce off spring he needed only to close his thighs, and this he did all day long, which explained why there were so many shayatin in the world. Other scribes told Westermarck that Shaitan has a wife named Shaitana.

The Saliva of Iblis[]

When the angels were preparing the soil for making the body of Adam, Iblis enviously observed the scene. He maliciously spat on the soil. The portion of the soil on which shaytan had spat was used to fashion Adam's navel. From this soil was also created the dog. It is for this reason that the Angels of Rahmat do not enter a home wherein there is a dog.

It is said his mother is called Um Alkor (ام الكور). The other important female jinni is his lover Hanīsh (هنيش).

His gatekeeper of his palace is Sinjab (سنجاب).

It is said that he laid 30 eggs: 10 in the west, 10 in the east and 10 in the middle of the earth. From every egg emerged a race of devils, like ghilan (ghouls), 'aqarib (scorpions), qatarib (night birds), jann (snakes), and those with various other names. Each of them is an enemy to mankind. He is sometimes known as Abu Mirrah (Father of Bile).

As Adam had three sons, Habil or Abel, Qabil or Qabil Cain, and Shis or Seth, so Satan had nine: Zu-l-baisun, who with his host occupies bazars, and all the wickedness done there is his work; Wassin, ruler over grief and anxiety; Awan, the companion of kings; Haffan, patron of wine-bibbers; Marra, superintendent of music and dancing; Laqis, lord of the worshippers of fire; Mazbut, master of news, who causes people to circulate malicious and false reports; Dasim, lord of mansions, who causes hatred between man and wife. When people return from their journeys he prevents them from thanking God for their safety, and causes wars and contentions. Some say that he is the lord of the table-cloth (dastarkhwan), and does not allow people to say the Bismillah or grace when they sit down to meals, and after eating he causes them to forget to return thanks (shukr, ihsan). Last of the nine is Dalhan, whose abode is in places of ablution and prayer, where he defeats the object of the pious by throwing difficulties in the way of the performance of their duties. These nine sons of the undaunted, the infernal Satan, are the mortal enemies of the race of Adam. They never allow them to do a good action, but exert all their influence in causing them to sin. He has nine children added to his family for every one born among men.

Iblis has many children. . There are other prominent sons such as Halal (هلال) and Balal (بلال). Sons with minor influence include the following: 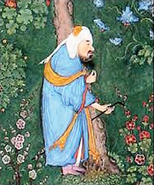 Iblîs, in the guise of an old man, leads a party of eight Quraysh soldiers to the cave where Prophet Muhammad and Abû Bakr are hiding. 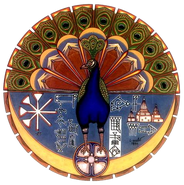