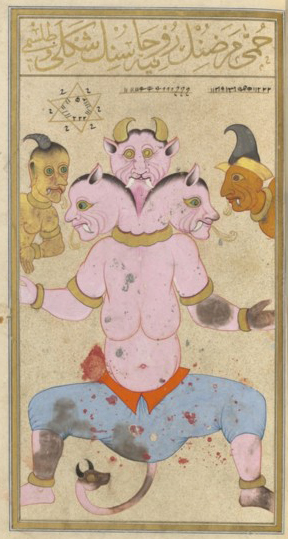 Huma (Arabic: حمى, the ‘Fever’) is the name of this jinni meaning one who brings heat to the human body, i.e. he is responsible for the common fever. Consequently, like Kabus, Huma is one of the most popular of the jinns responsible for human illnesses, so his talisman is encountered frequently.

The jinn of fever is commonly represented as a demon with three heads, perhaps adapted into the pseudepigrapha Testamentum Salomonis (The Testament of Solomon), in which a three-headed demon is considered responsible for the birth of blind, deaf and epileptic babies. In the illustration two heads are identical, vaguely equine but with the usual tusks and smoke, one looking right and the other, left. The third head looks more demoniac and is placed above the other two facing forward in the center. The frontal position of Huma is not unusual, but his open legs with bent knees and open arms, almost as if he wanted to capture the viewer, distinguish him from all other jinns. The presence of a tail ending in an animal’s head is also peculiar. Whilst not at all uncommon in representations of demons and jinns, it is unique in this series of illustrations. In the Kitab al-bulhan, which provides a model followed closely by this painting, Huma has not one but two tails. Two single-horned attendants (one of them wearing a hat) peak into the painting very close to Huma’s side heads.

Add a photo to this gallery
Retrieved from "https://jinn.fandom.com/wiki/Huma?oldid=1404"
Community content is available under CC-BY-SA unless otherwise noted.