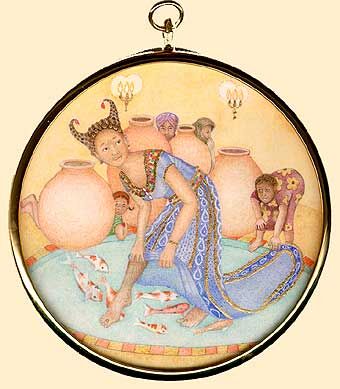 Al-Hadhad was a brave man and when 'Amr Dh'l-Adh'ar marched against him he disguised himself as a Bedawi and entered the hostile camp where he ascertained that the soldiers of 'Amr were dissatisfied. As he returned in the midday heat he saw how two snakes, one white and the other black, fought with one another and only gave up the struggle when they were tired out. The white snake came towards al-Hadhad, opening its mouth as if imploring him, and out of pity he poured out some water for it to quench its thirst. The same happened after a further struggle.

The fight continued till the white snake had killed the black one after which it went away and al-Hadhad went to seek shelter among some trees from the heat of the sun. While he was there he heard sounds approaching and drew his sword to defend himself in case of need. Then he saw a company of jinn of handsome countenance and clad in fine garments come towards him. They greeted him and bade him have no fear, for they had come to thank him for the assistance he had given to one of their princes in his struggle with a run-away slave. He saw then that one of the young men bore scars on his face due to the recent struggle. They told him that they did not know of any better reward than to marry him to the sister of this young prince whose name was Rawaha daughter of Sakan. So they married him to her and made only one stipulation: that he should never ask her the reason of anything she was doing, to which he agreed. When he returned to his camp he learned that the army of 'Amr had dispersed and consequently he also disbanded his troops and sat in his castle to await the arrival of his bride. After the marriage she bore him a son, but when he was one year old a female dog came in at the door, seized the child and dragged it out of the room. Al-Hadhad looked at Rawaha, the mother, but as she did not utter a word he too remained silent. Next she gave birth to a daughter who when she had reached the same age the dog came in again and dragged the child out of the room by her legs, but as the mother remained silent he did not utter one word to question her. When she gave birth to a second son and the dog did the same as she had done to his brother and sister, he said to the mother: "Rawaha!" She replied: "What?" His reply was that she should stop the dog from doing what she had done to the other two children. When Rawaha heard this she said to him: "O Hadhad, I must, leave thee! They have not been dragged away but have been carefully nursed and will return to thee when they have reached the age of five. As for the eldest son, he has died, while the second boy will live as long as my father and will die shortly after him, but the girl will live." Then she went away and was never seen again. He then found the son and the girl Bilqis in their beds. Most learned men will not accept this account, but ordinary people believe it, and Allah alone knows the truth. Al-Hadhad reigned twenty years, and when he felt that his end was nigh he called the princes and nobles of Himyar together and advised them to appoint Bilqis as their sovereign after his death and, though some were of opinion that a woman was not suitable, they agreed that she was more intelligent than most men and promised to obey her. As a last advice, he told them that they might appoint in her place his nephew 'Amr bin Ya'fur.[1]

One day, a hoopoe bird arrived from Saba' and brought Sulaiman word of the beautiful and powerful Bilqis. Intrigued by descriptions of her, he invited her to travel to Jerusalem, and she accepted the invitation.

Bilqis journeyed to the country of the famed Sulaiman and decided to stay for some time in order to learn more about the wise king and his all-powerful Allah. The king and the queen found each other fascinating and gradually began to fall in love. This worried the captive jinn, who feared that if Sulaiman and Bilqis married and had a son, the jinn would be forced to continue in service for another generation, and perhaps much longer, never again tasting freedom. A jinni named Zabwa warned Sulaiman: "O prophet of Allah, a son by this woman will be cruel, sharp, and hot in body and soul." Zabwa and his fellow jinn spread rumors that Bilqis was one of their own – which indeed was partly true – and as such had a jinn’s tell-tale hairy legs and donkey feet.

Sulaiman was troubled by the rumors that Bilqis had jinn blood coursing through her veins . To find out if the rumors were true, Sulaiman devised a test for Bilqis. In his private quarters he had an expansive glass floor constructed, with water and fish beneath it. Waiting on the far side of the glass floor, he beckoned to Bilqis to cross the room and join him. Mistaking the glass for a fish pond, the queen lifted her skirts to walk through the water. The king saw her legs and looked away. He finally confessed to Bilqis: "Lo! It is a floor, made of smooth glass."

What exactly did Sulaiman see? The sources are unclear. Most agree that Bilqis’ feet were not hooved but that her legs were quite hairy. Sulaiman was alarmed by this discovery. His jinn rejoiced, but only for a brief moment, for the king commanded them to prepare a lotion of slaked lime and ash to remove the queen’s leg hair. At this point Bilqis said, "O my Lord! I have indeed wronged my soul: I do [now] submit [in Islam], with Sulaiman, to the Lord of the Worlds" (Qur'an 27:44).

Bilqis married Sulaiman and bore him a son called Rehoboam (رحبعم), whose arms were said to reach down to his knees – a sure sign of leadership, according to the belief of the time. Bilqis remained with Sulaiman for seven years and seven months and then died. Sulaiman buried her beneath the walls of Palmyra in Syria.