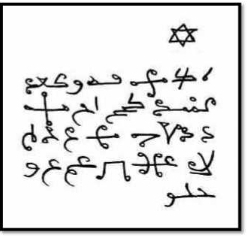 Barqan Abu al-'Adja'yb (Arabic: برقان ابو العجائب "Two Thunders, father of Wonders"), is the king of Mercury (‘Uthoorid), the day Wednesday, the color Blue, the metal Brass and was the lord of the City of Carnelian, and the Castle of Gold, and under his rule were five hill-strongholds, in each five hundred thousand Marids; and he and his tribe worshipped the Fire, not the Omnipotent Sire. He is monitored by the angel Michael (ميكائيل). Also known as The ‘Black King’ (Al-Malik Al-Aswad). His talisman is elaborate and also his helpers are quite extraordinary. He teaches the evil jinn all about magic and to harm humans with it.

Add a photo to this gallery
Retrieved from "https://jinn.fandom.com/wiki/Barqan?oldid=1102"
Community content is available under CC-BY-SA unless otherwise noted.