Jinn Wikia
Register
Don't have an account?
Sign In
Advertisement
in: Jinn, Kings, The Seven Jinn Kings, Jinn of the Sun 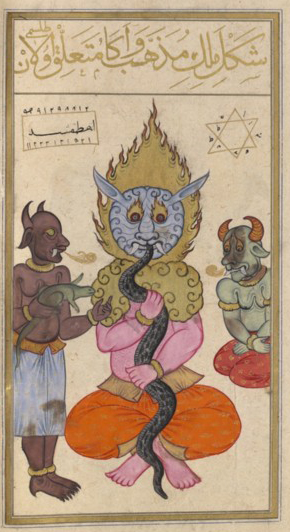 Al-Mudhib Abba Deebaj (The Golden One, father of Silk Brocade) is the son of al-Harth, known also as Abu 'Abdallah Sa'id (ابو عبدالله سعيد), the golden king is the lord of Sunday, the Sun, the color yellow or black and the metal lead and is monitored by the angel Ruqiayil (روقيائيل). Al-Mudhib possesses all secrets of occult knowledge such as the transmutation of gold and the workings of the sun. This jinn is associated with the incense sandarus (Arabian sandarac).

He is of the Jinn tribe Banu Danair al-Jan Jamlith, a powerful and mighty family known for their wisdom, knowledge, and mastery of the occult craft.

He is one of the jinn present during King Solomon’s time. He is one of the Eastern kings. He is under the domain of Master Jalyut. He has over 360 different tribal families under his control. He possesses the secret of transmutation into gold and all the other workings under the sphere of the Sun.

This is a powerful and mighty family known for their wisdom, knowledge, and mastery of the occult craft. One of the most famous of his children and his heir is the prince Sa‘īd Ibn al-Maḏhab (سعيد ابن المذهب).

He has also a famous daughter whose moniker is the ruby of luck and joy. Her name is ‘A’elah bint al-Maḏhab (عائلة بنت المذهب).

He has seven palaces associated with the movement of the Sun that he travels between while administrating his dominion. He has six ministers under his leadership. Their greatest is known as Far‘ahīd as-Sayaaf (فرعهيد السياف).

His corresponding Element is Fire. His metal is gold. His incense is Sandarac. He is associated with the first glyph of the Great Name (Ismul Azam).

His seal: Draw a six pointed star. On each triangle of the star write part of his name without the inclusion of “bin”. You should end with his title. Then write his full nickname in the center. Write the following numeric sequence (right-to-left) three hundred and sixty times around the six pointed star: 551352512724529875212525331427