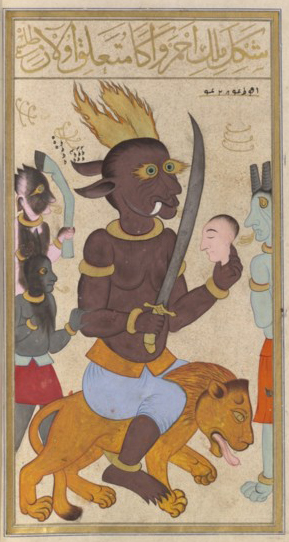 Abu Mihriz (Arabic: ابا محرز "Father of the Attainer"), Abu Ya'qub (Arabic: ابو يعقوب), or al-Ahmar (Arabic: الاحمر "The Red One"), is the lord of the red planet, Mars (المريخ al-Mariikh), the color red, the metal Copper or Red Mercury and is monitored by the angel Samsama’il (Arabic: سمسمائيل; Hebrew: סַמָּאֵל Sammāʾēl). He is one of the leaders of prince Morrah son of Iblis' army.

The iconography of the Red King is one of the most interesting of this group especially when compared to two illustrations in the Kitab al-Mawalid in the Bibliothèque nationale de France. The jinni is depicted as a frontal figure with multiple heads, the only common attribute being the sword in his hand. However, another illustration shows a second jinni called Tarish sitting on a lion and biting the body of a snake. Tarish is not present in the Kitab al-Bulhan nor in the Ottoman copies, but the image of the Red King seems to incorporate his attributes too.

The Sabians of Harran gave to the spirit of Mars (اريس Ārīs) the name Lord of the Blind (رب العميان Rabb al-'Umyan) and Mara-Samya, which means the blind (Samya) lord (Mara) in Aramaic, and they call him blind because of his extreme violence and because in his rage he strikes without regard. Interestingly the angel of this planet, Samael, is also known as the "Blind One", whose duty is probably to seal the hearts of those who disbelieve.

Instructions for the Killing of an Evil Jinni by al-Ahmar[]

If a possessing jinni or Wind rebels against you, and you wish to kill him or expel him from a body, then draw a picture of him and the angel in charge of the spirits of the jinn upon a clean parchment or a clean floor. Write these names upon his neck so that they extend across his shoulders:

On his right arm and right side, you write:

On his left arm and left side, (you write):

On his right leg and right shin, write 'Hajaj (حجج)' on his left leg and left shin, 'Encompass them': and on his belly, these pure, sacred names, which are feared by all the spirits, that is, the angels and the jinn, and which constitute a binding pact upon them, and which is the Greatest Name:

When you wish to seek vengeance against the Wind, draw this image and strike it with a rope attached to a pomegranate branch and he will awaken and adjure you by the Lord Most High not to kill him. If he requests a pact, agree to it and make a pact with him; then write an amulet for him and let him go. If he returns, and he is Muslim, punish him and imprison him, and if he is a disbeliever, kill him. But hasten not to kill, for therein a harm and evidence of one's rancor, none of which befit the kindness of sages. If he declines to speak, rebels, transgresses, and refuses to come out, write the names that are in the images. Summon the angel in charge of them, Mitatrun (ميططرون); summon the Ruhaniyyah of the seven planets. Say three times, “This is indeed an enemy who has rebelled, transgressed, and disobeyed El Most High.” and insert the spear into any of the letters you wish and he will die. Alternatively, if you cut it with scissors, bit by bit, as you evoke, he will be cut into pieces, just like the paper. Therefore, guard, my brother, what has reached you, namely, this image, which is an independent treatment, and which can be employed in three hundred types of real magic pertaining to treatment and the like. Use it only for that of which the Lord Most High approves and your reward will be in this life and the next.

If someone brings a person afflicted by a Wind to you, write the names on his body, just as you wrote them on the image, and summon the Ruhaniyyah of the planets. Carry a knife with you and, for whatever part of the body the person informs you of, insert the knife into the first letter of that line so that the Wind can exit his entire body. Do likewise for anyone afflicted by a Wind, regardless of which part of the body he is in.

If you have someone suffering from conjunctivitis brought to you, stab the first name in the image with a knife, and continue stabbing, letter after letter, until he leaves him. Do likewise for pain in any part of the body.

Know, my brother, that this is a secret of secrets. Therefore, guard it and do not disclose it to an ignoramus, for he will employ it in that which is neither permissible for him nor pleasing to Allah Most High. Impart wisdom only to those deserving of it, for they are worthier of using it.[2]

Inscribe it on carnelian or gold on Tuesday, when Mars is on the ascendant. The seal is as you see: 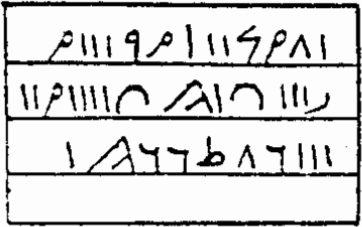